The topic of the forum

What does it mean to be a Daseinsanalyst?

Thinking on the Topic:

Imagine Socrates standing before us and addressing to us the following seemingly  simple questions:

What does it mean to be a Daseinsanalyst?

What does a phenomenological-existential psychotherapy mean? 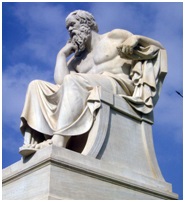 It is well-known that the Greek philosopher Socrates, who lived in the ancient Athens of the fifth century BC, spent much of his time in the city, initiating conversations with people. He addressed himself to anyone who claimed to know something about some specific area and asked them about it. He would start a dialogue with them.  Τhe procedure of the Socratic dialogue was very unusual, since it didn't establish anything at all, it had no specific thesis, it did not conclude with a specific point. The dialogue ended in an aporia  and the result was purely negative. In this sense, Socrates was a thinker of negativity. His goal was not to establish a positive doctrine but merely to call into question what he saw before his own eyes. Socrates was only doing something negative; nonetheless he made other people reflect on themselves and reconsider their beliefs and certain aspects of their lives.

The focus of the present forum, however, is not on the eternally enigmatic figure of Socrates, but on psychotherapy. It is worth noting that Socrates' communicative stance - despite distinct differences-  is comparable to the hermeneutic-phenomenological process of Daseinsanalysis: both of them involve a decisive moment, the moment that shakes us out of our established, characteristic states that do not allow us to call into question what we see before us, that is, “the things themselves” (die Sachen selbst); which means, both the ontic facts and their ontological prerequisites.

So a claim is laid upon us: to find our own answer to the fundamental questions concerning our being. Not only to face up to our nothingness, but to respond to it.

“What does it mean to be a Daseinsanalyst?”

is an easy question with an easy answer.  Yet it could be seen as a provocation, the undertaking of which might be no easy task. It calls for a reflective and authentic reconsideration of our Daseinsanalytic identity.  Perhaps, in the light of authentic questions, fixed identities are no longer as secure …

© 2014 All rights reserved.
Make a free websiteWebnode
Website powered by Webnode
Launch your own website for free!
Start here